Sciatic nerve (SN) injury after acetabular fractures or hip dislocation is not an unusual complication of these orthopedic emergencies [1]. Nerve damage can be the result of the initial trauma or iatrogenic trauma during surgery and can also occur as a late complication of surgery [2]. Several studies have shown that posterior wall fractures of the acetabulum are more associated with NS injury [3]. We report a new case of NS lesion after fracture-dislocation of the hip. A screw conflict caused significant swelling of the SN.

A 22-year-old man with no medical history was hit by a car while riding his motorbike two years ago. Physical examination in the emergency room revealed total functional impotence of the right lower limb. Pelvic x-rays showed a fracture of the right acetabulum in addition to a total hip dislocation. The patient was then transferred to the operating room and underwent reduction of the dislocation with the insertion of two 3.5 mm screws directly into the cortical bone and placement of a curved plate with two screws on either side. other of the fractured fragment. Two pins were also temporarily fixed to the posterior wall of the acetabulum (Figure 1).

Figure
1: Postoperative pelvic radiograph showing screw fixation of the plate to the posterior wall of the acetabulum.

A year after his accident, the patient was referred to our physical medicine and rehabilitation department. The clinical examination found a steppage gait of the right foot and muscle strength was evaluated at 2/5 in dorsiflexion of the straight foot. The patient was unable to walk in his tales. In addition, the right patellar reflex was absent, and the patient also presented with hypoesthesia of the right leg.

Electromyography (EMG) of the lower limbs showed severe truncal axonal damage to the common peroneal nerve. Ultrasound of the hip and SN showed significant swelling of the SN of the right limb. The cross section (CSA) of the injured nerve was very large at 1.50 cm2 (Figure 2). The long axis view showed impingement of the screw on the SN, in addition to a significant swelling of the SN upstream of the place in contact with the screw (Figure 3). The area of ​​the contralateral SN was also calculated, finding a measurement of 0.30 cm2 (Figure 4). 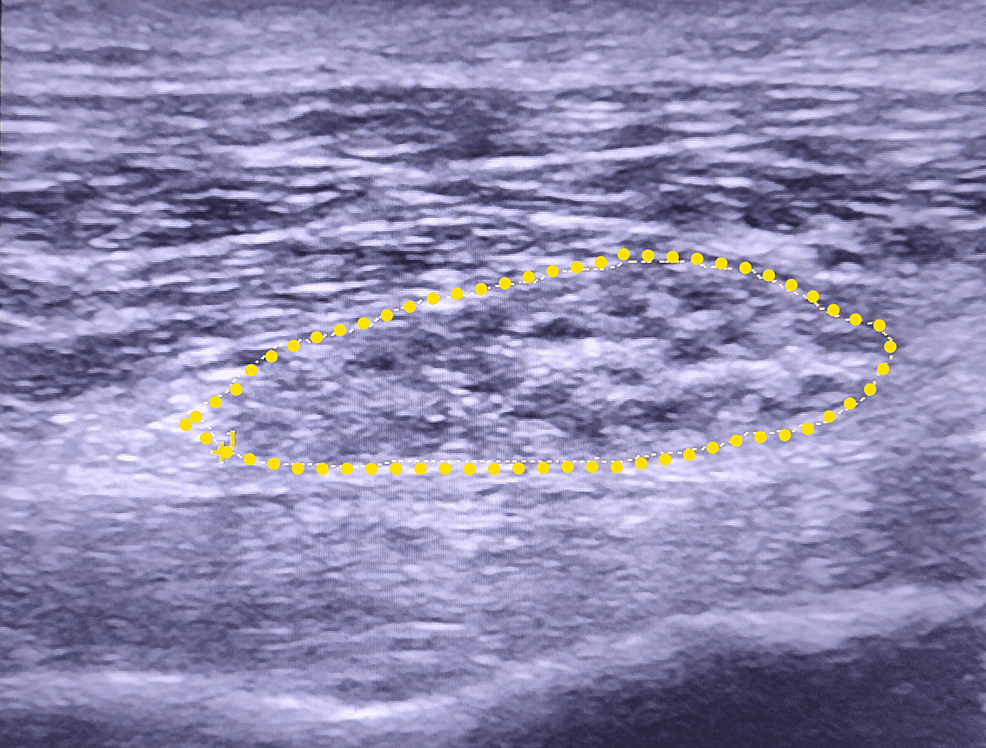 Figure
2: Short-axis view of the injured sciatic nerve (yellow dotted lines) with the measurement of the cross-section (CSA) (1.50 cm2). 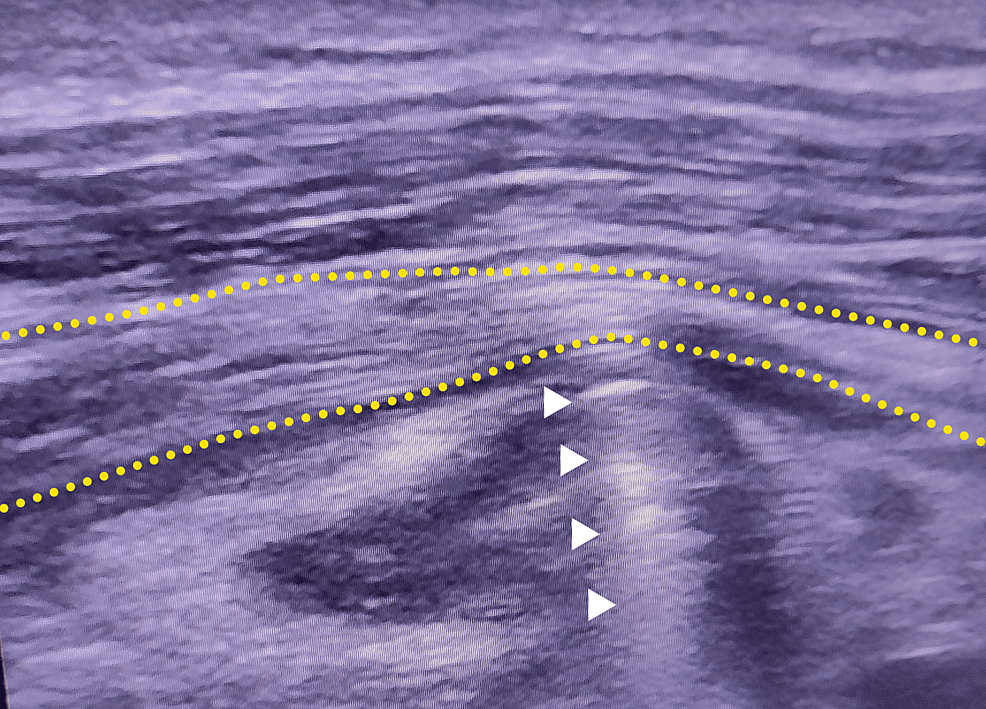 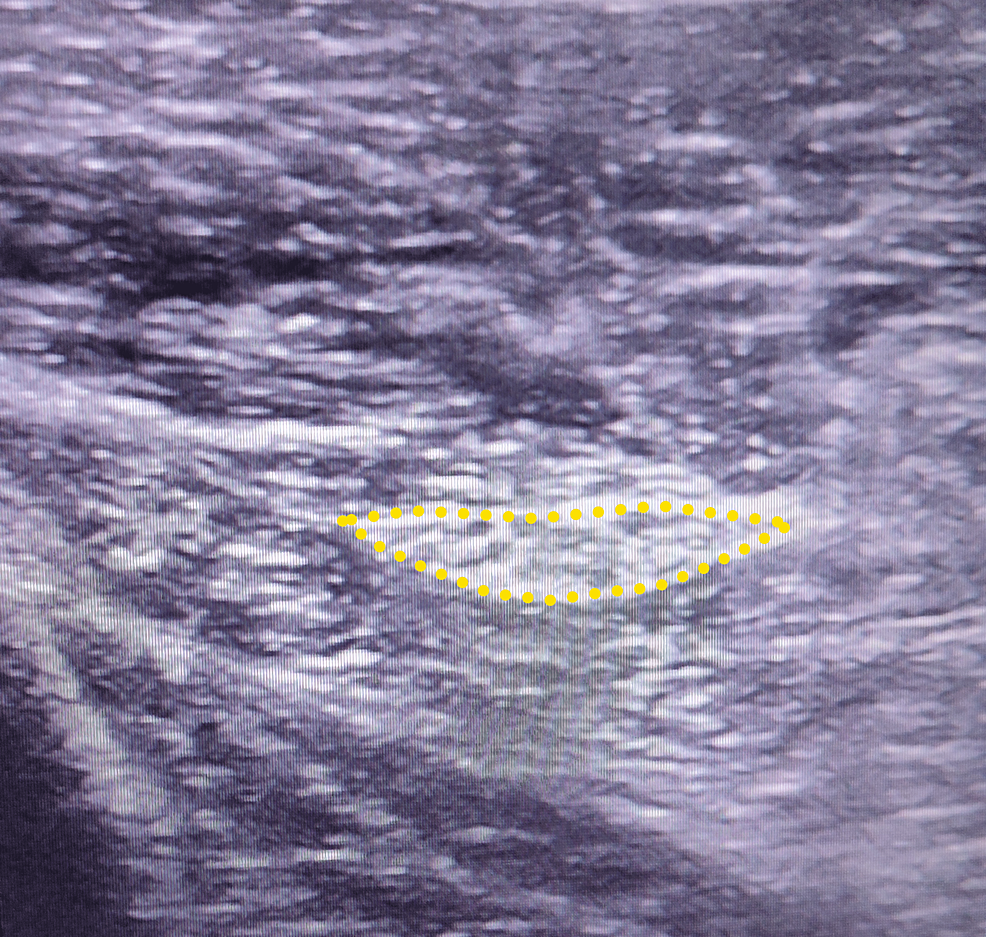 The decision of the orthopedic surgeons was not in favor of the reoperation and the removal of the screws, considering it complicated and too risky for the patient. The patient is currently undergoing ultrasound-guided injections of platelet-rich plasma (PRP) around the nerve swelling and into the levatoris muscles in addition to physical rehabilitation.

Several postoperative factors have been described as being associated with NS injury [4]. A hematoma can produce compressive neuropathy in the first days after surgery [5]. Later, causative events such as muscle or capsular scarring, migration of osteosynthesis material and heterotopic ossifications were also identified. [4,6,7]. From there, the history detailing the date of onset of the symptoms related to the surgery and the data of the physical examination are both essential to find the correct etiology of the swelling of the NS.

Ultrasound provides good quality morphological imaging of the SN with respect to its exact location, trajectory and extent [8,9]. The average range of CSA SN normal was 0.47 to 0.59 cm2 at the level of the gluteal furrow and 0.39-0.50 cm2 in the middle of the thigh in a normal population [10]. In our case, the CSA of the injured nerve was one if not the largest ever measured at 1.50 cm2 (Figure 2).

Preventative approaches during hip surgery have been recommended by many authors, especially with the posterior approach such as keeping the hip in extension and the knee flexed to minimize traction on the SN [11]. Additionally, the retractors should be carefully positioned to avoid significant posterior retraction with the hip in flexion. [2]. Alternatively, intraoperative SN monitoring with somatosensory evoked potentials (SSEPs) and spontaneous EMG may be helpful in preventing nerve damage, especially with high-risk acetabular fractures [12].

Murena et al. conducted a systematic review, evaluating the effectiveness of intraoperative nerve monitoring (IONM) in orthopedic and trauma surgery of the hip and pelvis. The results were insufficient to justify the routine use of the IONM. Nevertheless, the IONM could be useful in critical maneuvers, positions or pathologies that can lead to intraoperative damage to the NS [13].

Surgical NS decompression or reconstructive surgery after acetabulum fractures has been reported. Results showed better results on sensory neuropathy than on motor [14-16]. Recently, a retrospective study evaluating endoscopic SN decompression after fracture or reconstructive surgery of the acetabulum in comparison with endoscopic treatments in idiopathic deep gluteal syndrome showed some relief after endoscopic SN release. [11]. Additionally, three patients with motor weakness and no foot drop showed complete motor improvement. However, no complete motor improvement was observed in patients with foot drop. [11].

In our case, reoperation was considered too risky for the patient. Ultrasound-guided injections of PRP around the nerve and into the levator muscles of the injured foot were offered to the patient. Indeed, PRP is believed to provide essential growth factors to promote the repair of tissues with low healing potential. [17]. Reports of PRP injections to treat peripheral nerve damage are mostly based on animal experiments and in vitro studies with promising results [18,19]. Reports of clinical application, although rare, have shown encouraging results for nerve regeneration treated with PRP [20,21].

Another possible therapy in this condition could be ozone therapy (OT). This medical therapy consists of delivering oxygen, ozone comprising less than 5% at its highest concentration. This therapy has been tested on rats with an SN lesion [22]. Ozone was administered daily at a concentration of 35-40 µg/ml and a volume of 5 ml intraperitoneally for two months. Results showed significant functional improvement after two and four weeks after OT [22]. Other experimental studies have shown favorable results on nerve regeneration and reduction of damage to myelin and axons after using OT alone or in combination with methylprednisolone. [23,24]. Although these results are encouraging, further investigations and clinical trials are needed to assess the potential therapeutic role of OT.

A lesion of the NS must be sought after fractures of the posterior wall of the acetabulum and dislocation of the hip. The initial physical examination and clinical history are essential in determining the etiology of nerve injury and preventable measures should always be taken to prevent it.