The patient was treated with nonsteroidal anti-inflammatory drugs (NSAIDs), a short course of systemic steroids and topical steroid cream on the penile lesion, followed by topical antifungal cream for two months. The patient responded well to the treatment and resumed his usual activities.

COVID-19 has caused a huge burden on health systems around the world. The disease has affected people’s lifestyles, which could take a long time to recover. The disease has many symptoms, including fever, upper and lower respiratory tract symptoms, gastroenterological symptoms, and general malaise, among others. [1].

The typical immune response to disease can lead to several complications, including thrombotic events, chronic lung disease, prolonged stay in intensive care unit and hospital, and mortality. [2]. Some emerging and experimental treatment modalities also have consequences with as yet unknown side effects [1]. Additionally, some known syndromes have become associated with COVID-19, such as reactive arthritis [3,4]. Here, we describe the case of a male patient who developed reactive arthritis after recovering from SARS-CoV-2 infection.

Presentation of the case

In July 2021, a 43-year-old Arab man developed a sore throat two days after interacting with his father, who was diagnosed with SARS-CoV-2 infection. A throat swab test was performed, which came back positive. Later that day, he began to develop a high fever of 39°C. Since he had no respiratory symptoms and was considered a mild case of COVID-19, he was sent home for isolation with supportive care. At home, he started having rhinorrhea, a stuffy nose and myalgia. He started taking paracetamol 1 g every six hours regularly, but the myalgia persisted. He began self-administering ibuprofen 400mg twice a day as he became bedridden and unable to walk. On day 4 after the onset of symptoms, he developed anosmia and ageusia. After two days of taking ibuprofen, her mobility and symptoms improved, but the anosmia and ageusia remained. On day 7 after the onset of COVID-19 symptoms, he stopped all medications and continued to do well. On day 10, a throat swab was repeated as per patient preference, and the result came back negative. On day 15, he began to develop red eyes, which he began to treat with artificial tears. On day 16, he started complaining of severe lower back pain and noted the appearance of a painless penile lesion with dysuria, which prompted him to seek medical attention.

The patient had no known chronic illnesses and was not taking regular medication. Additionally, he had no family history of autoimmune disease. He is married and has extramarital affairs. Her back pain started suddenly on day 15; the pain is worse at rest, especially when sleeping. The patient was bedridden due to pain. He feels pain in his lower back and buttocks area. On examination, his vital signs were within the normal range and he was classified as Class I obese with a body mass index of 34. He was formally diagnosed with bilateral conjunctivitis (Figure 1), focal tenderness in the sacroiliac region and circinate balanitis (Figure 2).

Figure
1: Presentation of bilateral conjunctivitis in the patient after recovery from COVID-19. 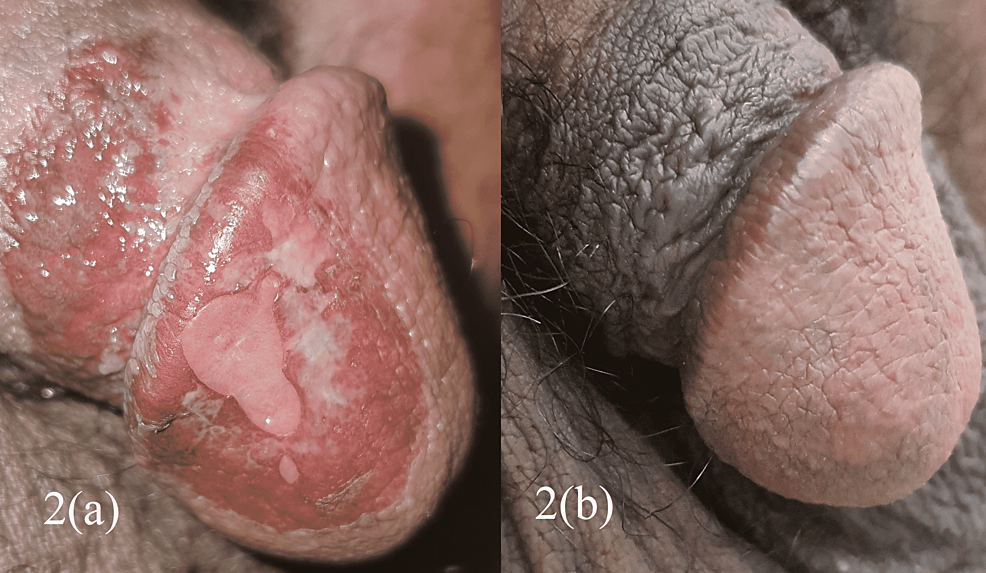 Figure
2: Circinated balanitis at (a) presentation and (b) two months after treatment.

Further examination showed normal complete blood count, electrolyte levels, kidney function, and liver and thyroid function. The erythrocyte sedimentation rate was 40 mm/hour, which was slightly elevated, and C-reactive protein was also elevated at 8 mg/L. Antinuclear antibodies and rheumatoid factor were both negative. Screening for sexually transmitted diseases was negative. Urine analysis and culture were negative for bacteria, and radiography of the sacroiliac joint was unremarkable.

The patient was started on treatment for reactive arthritis with the nonsteroidal anti-inflammatory agent ibuprofen (starting dose: 600 mg every eight hours) and the systemic steroid prednisolone (25 mg once daily for five days), with a topical steroid for the penile lesion. The combination of ibuprofen and steroids was initiated due to the severity of the symptoms, considering the presence of all symptoms of reactive arthritis and the patient’s poor functional status due to his symptoms. . Two days after the start of treatment, low back pain and dysuria had improved markedly. At one week follow-up, the dysuria had completely disappeared, but a whitish discharge developed on the penile lesion, probably a local fungal infection. The patient was advised to observe the rules of personal hygiene and to use ordinary soap for cleaning the pelvic region. He was also initiated on terbinafine 1% antifungal cream applied topically twice a day. At the one-month follow-up, a significant improvement was observed in the penile lesion, and the patient was further advised to continue the treatment for six weeks. The patient reported no more symptoms at the two-month follow-up and his penile lesion disappeared (Figure 2). The HLA-B27 test was performed at follow-up and the result was negative. Patient consent was obtained prior to writing the manuscript.

Reactive arthritis is a syndrome of post-genitourinary or gastroenterological infections. It mainly presents as the triad of arthritis (peripheral or axial), conjunctivitis and genitourinary symptoms, particularly circinate balanitis. [5]. Usually, it is more common with genitourinary and digestive bacterial infections such as chlamydia, shigella, and campylobacter.

Since the start of the COVID-19 pandemic in late 2019, few cases of reactive arthritis related to COVID-19 have been reported, most of them in men between the ages of 40 and 70. [6]. COVID-19 has been shown to trigger a strong immune response in the body, which could explain the development of reactive arthritis. In one case, the patient presented four days after being diagnosed with COVID-19 with severe pain in multiple joints and lower extremities [4]. In another case, the patient presented with pain in the right knee and a penile lesion, then was diagnosed with COVID-19 [6].

In this case, the patient presented with the reactive arthritis triad shortly after recovering from a COVID-19 infection. Additionally, the patient experienced symptoms that were not described in the other case report of reactive arthritis after COVID-19 infection. [3,4,6], especially conjunctivitis and balanitis. Possible sexually transmitted infections were excluded. Response to treatment was rapid and evident with the use of nonsteroidal anti-inflammatory drugs (NSAIDs) and a short course of glucocorticoids.

The first line of treatment is NSAIDs [7]; however, glucocorticoid administration is initiated when the response is weak [7]. If the patient develops chronic reactive arthritis, a disease-modifying agent might be considered after consultation with a rheumatologist [7].

The patient described in this report had reactive arthritis after COVID-19 infection, who presented with a triad of symptoms. However, the patient responded exceptionally to the combination of systemic steroids and NSAIDs over a short course of five days. We understand that early recognition and treatment of reactive arthritis ensured a favorable outcome. Additionally, circinate balanitis requires regular follow-up examinations as complications such as fungal infections may occur. In addition, personal hygiene and the application of local antifungals are imperative to combat this disease.

It is not known whether the COVID-19 vaccine can cause this side effect; furthermore, it is unclear whether COVID-19 has a possible effect on the occurrence of reactive arthritis with or without vaccine administration. Further studies on the association between SARS-CoV-2 and reactive arthritis are warranted.