Distal femoral fractures represent less than 1% of all fractures and approximately 3-6% of all femoral fractures [1]. These fractures can be caused by either high energy trauma or low energy trauma. High-energy injuries, including traffic accidents and sports accidents, are more likely to occur in men aged 15-50, while low-energy injuries such as falls while standing are more likely cause distal femur fractures in women aged 50 and over. . In both cases, axial loading of the leg is the most common mechanism of injury [2]. Due to the inherent complexity of these injuries, several classifications have been described to allow for proper documentation, treatment planning, and outcome evaluation. However, some types of distal femur fractures elude them. The authors report a rare case of intercondylar fracture by cleavage of the femur through which they attempt to specify the epidemiological characteristics, the lesional mechanism, the pathogenesis, the therapeutic attitudes and the long-term prognosis of this type of fracture.

A 32-year-old woman suffered a stick blow to the front of her left knee when it was bent at 90°. She described severe knee pain and was unable to bear weight. Clinical examination found effusion of the left knee and pain on palpation of the femoral condyles. The mobilization of the knee was very painful. Plain radiographs showed a vertical fracture line of the femoral metaphysis extending to the intercondylar notch with no separation of a bone fragment (Figure 1).

Figure
1: Plain radiograph showing a vertical fracture line of the femoral metaphysis extending to the intercondylar notch without separation of a bone fragment

In side view (Figure 2), the fracture was not visible. 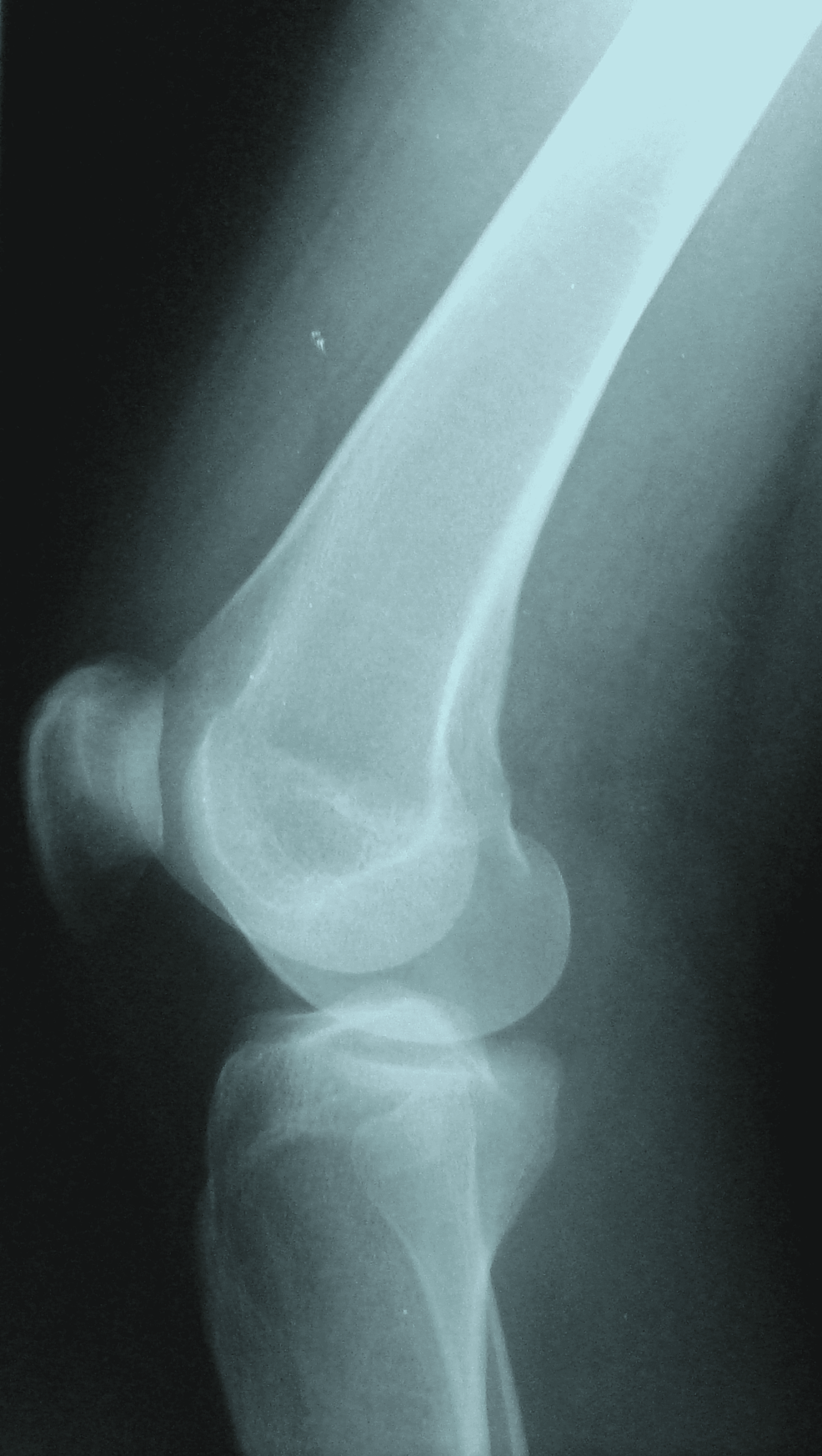 A computed tomography (CT) scan of the left knee (Figure 3) was performed and showed an intercondylar fracture without cortical lesion or displacement. This fracture was associated with minimal hyperdensity of the subchondral bone of the proximal tibialis and of the two femoral condyles, indicating bone oedema. 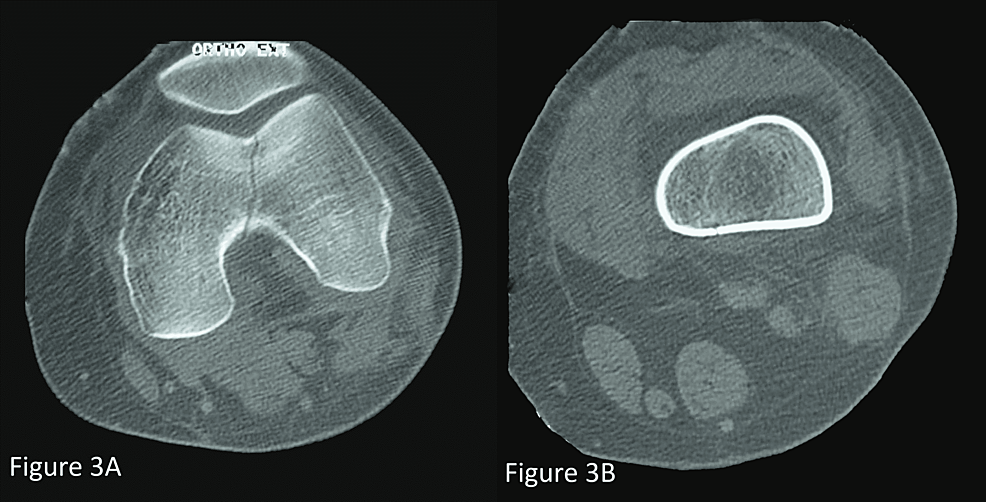 Since the fracture was not displaced, we opted for non-surgical management with a long leg cast for 6 weeks, followed by physiotherapy and full weight bearing. After 4 months, the evolution was favourable: the patient was asymptomatic and had regained full mobility. After 10 years of follow-up, there were no clinical or radiological signs of knee osteoarthritis.

Fractures of the lower end of the femur are relatively rare, accounting for less than 1% of all fractures and 6% of all femoral fractures [1]. Few classifications have been proposed to allow adequate documentation, treatment planning and outcome evaluation. Neer et al. described in early 1967 one of the simplest classification systems [3]. In 1980, Seinsheimer published his system where he classified fractures of the distal femur into four types [4]. In fact, the most commonly used classification for distal femur fractures is the AO/Orthopedic Trauma Association (OTA) system described by Müller and colleagues. [5]. The purpose of these systems is to analyze and categorize the variety of these fractures. However, some fractures cannot be included in any classification, such as intercondylar cleavage fractures of the femur. To the knowledge of the authors, only four cases have been reported in the literature [6,7].

The mechanism of these fractures remains uncertain. Pogrund et al. reported three cases of “intercondylar fracture by cleavage of the femur” and stated that this injury is caused by a force transmitted through the patella [6]. Our case supports the theory that these fractures are caused by a high-energy direct impact to a knee flexed between 60 and 90°. In this position, the patella is located in the axis of the femur and transmits the shock wave towards the trochlea, resulting in a fracture associated with a contusion of the cartilage.

The anteroposterior radiograph of the knee shows a sagittal vertical fracture line originating in the intercondylar notch, extending upward into the metaphysis and ending in the diaphysis without rupturing the cortices. The scanner confirms the continuity of the femoral cortices and detects any lesions of the patellofemoral cartilage.

Review of the literature suggests that surgical fixation for distal femur fractures has consistently demonstrated better outcomes than nonsurgical methods, including improved alignment, healing rates, knee motion, and functional results. Non-surgical management of intra-articular fractures of the distal femur is reserved for stable and slightly displaced fractures [8]. Additionally, experimental studies have revealed that

The stability of this type of fracture is maintained by the integrity of the medial and lateral columns. Moreover, in this type of fracture, there is no displacement and therefore no surface incongruity which indicates the non-operative treatment. Management consists of limited weight bearing in a splint or cast and maintained for 4 to 6 weeks [10]. X-rays should be obtained throughout the recovery process to ensure proper healing and to monitor displacement. After the cast is removed, the weight-bearing should be protected until there is radiographic evidence of union.

In our case, the short-term evolution was favorable, with consolidation and recovery of a full range of motion. In the long term, there was no clinical or radiological evidence of patellofemoral osteoarthritis. However, this complication occurred in all three cases reported in the study by Pogrund et al., which highlights the severe concurrent damage to the articular cartilage of the patella and intercondylar region and indicates long-term follow-up. [6].

The intercondylar fracture by cleavage of the distal femur is a rare injury, especially at this age and without pathological history. This type of fracture does not exist in the classification of distal femur fractures. In this case, the authors opted for non-operative treatment, but long-term follow-up is recommended to recognize possible patellofemoral osteoarthritis.